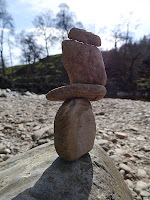 I watched a programme on TV a while ago that showed a guy in the US on a stony beach stacking fairly massive stones on top of each other. He built some amazing structures, with some of the stones only balancing on a thin edge. I remember him describing how he just listened as he laid one stone on top of another, and by doing so he would get a feel of which stone would successfully balance solidly on the one beneath. I've since discovered that this is quite a popular pastime, with lots of on-line information on the subject. I was out walking yesterday and while enjoying the scenery by the river I picked up some stones and decided to give stone stacking a go. The photo on the left shows what I achieved, I was quite impressed with my first attempt! As I walked away from the river bank, and my temporary piece of art, I realised that I really had listened and been very present as I used my senses to stay rooted in the moment while stacking the stones. As I was stacking I even heard some beech leaves bouncing by on the stones, the birds seemed to by chirping loudly, cheering me on maybe? The river trickling by and the air breathing gently on my face enabled me to really enjoy the experience. Every detail of my surroundings seemed vivid and bright, which someone made the stacking effortless. That feeling, experienced for a few minutes yesterday can be extended into my day at any point. I'll start by just listening.
"Balancing stones requires sensitivity, poise, physical co-ordination and a concentration of attention that results in what might be termed an existential state of being. It is, or can be, meditation, a physical feat, a creative challenge, an art." - A quote from the website (issue 7) www.stonefoundation.org/
Posted by Kathleen Kettles at 08:28 1 comment: 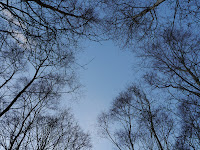 When faced with a painful predicament it's very easy to feel pulled down by the apparent lack of any understanding of our plight. We can feel torn apart, devastated, beaten and yet the very person, or people we think will understand can appear to observe us from behind sound proofed triple glazing. Apparently unaware, unable, or unwilling to stretch out a hand to comfort or support us. How quickly we can become self-absorbed by our own pain, becoming a helpless victim of circumstances thrown our way.
Before despondently sinking into depression - STOP! Often the reason we feel so shattered by our isolation at our time of need is because we are such emotional individuals! Those we love, our friends, our families may not be as in touch with their emotions as we are. They may simply not know how to handle our emotional state and feel ill equipped to give us the support we would like them to offer. Also, because some of us wear our hearts on our sleeves, this can be at worst intimidating for others, and at least awkward for them to handle.
It's our own great expectations that others will be able to step up to the mark when we crumble that can set us up for a fall. Speak up! More often than not simply expressing how you're feeling to others is enough of an opening to begin to get the help and support you need.
"It's not the load that breaks you down; it's the way you carry it." - Lena Horne
"Asking for help does not mean we are weak or incompetent. It usually indicates an advanced level of honesty and intelligence." - Anne Wilson Schaef
Posted by Kathleen Kettles at 20:17 No comments: 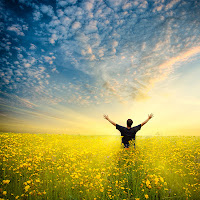 Sometimes, and for a variety of reasons, we get stuck in a belief system that the limitations we are living with right now is just the way it is for us these days. I have heard from clients literally hundreds of times phrases like,
"I used to be able to travel on my own."
"I used to have more self-confidence."
"I used to enjoy having time on my own."
"I used to love socialising."
When you hear yourself reminiscing about a positive attribute you seem to have lost somewhere along the road, remind yourself that it's the same you right now that had those abilities as is thinking they are outwith your reach now. Sheesh! That was a long and grammatically challenging sentence!
Seriously, if you HAD the capacity to display and enjoy these qualities, you HAVE the capacity to re-claim them now. Don't let your head convince you those days are past...liberate yourself from those headmind chains by stepping back into your confident, able self and enjoy coming back to the real you!
"It's only when we truly know and understand that we have a limited time on earth - and that we have no way of knowing when our time is up, we will begin to live each day to the fullest, as if it was the only one we had." - Elisabeth Kubler-Ross
Posted by Kathleen Kettles at 22:10 2 comments:

In order to reach self-actualization Abraham Maslow said, "What a man can be, he must be." Self-actualization is at the top of the pyramid of Maslow's hierarchy of needs, with more fundamental human requirements forming the base layers. Maslow himself didn't use the pyramid shape, although it's predominantly how his hierarchy of needs is portrayed.
My feelings about this is that we can quickly become disheartened and de-motivated when we look at the pyramid and interpret it as meaning, "If I don't have all the base categories fulfilled I will never achieve self-actualization." I don't believe that. If we become fixated on that belief we might find ourselves throwing in the towel and "making-do" with an unsatisfactory, unfulfilled existence. Of course we need our physiological needs met, and without a roof over our heads it can be difficult to have time to do much more than survive on a daily basis. However, if you have some of Maslow's basic needs fulfilled there really is no place for the belief that self-actualization is an unattainable dream, something others achieve, not you! You don't have to look far to discover "against the odds" stories of great feats and personal achievements, by people who were thought to be destined for an un-extraordinary life.
My sketch below re-vamps the usual pyramid of Maslow's hierarchy of needs....one thing I do know, I'll never be an artist, and that's okay!
"Success means having the courage, the determination, and the will to become the person you believe you were meant to be." - George Sheehan 1918-1993
Posted by Kathleen Kettles at 10:22 1 comment: 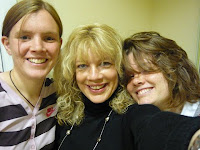 To say I'm a happy Mummy would be the understatement of the century. My two eldest children are happy, healthy and living the life they want, doing what makes their hearts sing. My son is happy and healthy and is still at school, so I'm not sure he'd say he's quite fulfilling the "living the life he wants" criteria just yet!
Perhaps my level of happiness for them is directly proportionate to my memories of the harder, more challenging times they've been through? None of us are immune to the ups and downs of life, but when we get through the periods in our life that are sad, hard and challenging, it's only then we can REALLY appreciate and celebrate the good times!
Emily & Tina, this is especially for you xxx
"Gratitude makes sense of our past, brings peace for today, and creates a vision for tomorrow." - Melody Beattie
Posted by Kathleen Kettles at 19:14 No comments:

Being nice v Being safe 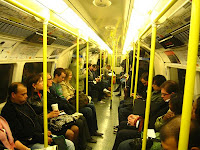 When I first started travelling down to London I was more than a bit overwhelmed by the volume of people...everywhere! My rural ways had me waiting at the opening tube doors politely letting everyone else on before me, then when the doors shut and I was left standing on the platform I quickly realised I had to get a grip and be less hesitant.
Once on the tube I would observe (trying not to stare!) all the different people, busying themselves in case they had to look at another bored traveller on their journey. In the early years of my London trips I would sit quietly on the tube and no matter who sat next to me, and no matter what they did I would stay glued to my seat. My head would tell me it would be impolite to move...sometimes the anti-social behaviour would be completely unbelievable yet still I would sit there..good old headmind training telling me not to draw attention to myself, not to cause a scene, "He doesn't mean it! Try to ignore him!"
It was only when a man standing next to me nipped my bum that I realised it was time to stop thinking I had to be nice and instead take charge and look after myself! He claimed he, "Couldn't help it!" It was only afterwards I wondered what he would've done if I'd matched his involuntary hand movements with an involuntary lifting of my knee...swiftly....to his groin.
Seven years on from my first trip to work in London whenever I'm travelling on a train (anywhere) I will pay attention to how I feel. If I feel at risk, or intimidated by a fellow passenger I get up and walk away to another carriage, or move to another seat. By quietly paying attention I stop being nice in favour of being safe.
"The greater the fear the nearer the danger." - Danish proverb
Posted by Kathleen Kettles at 23:00 1 comment:

Locally there is a hill with a tower on top of it, called Kinpurnie Tower, it can be seen for miles and is a very distinctive landmark.
Recently I was cycling about 4 miles inland from the bottom of the hill, and about 6 miles east of it. When I set off I could see the tower way off to my left and it stayed within my sight for the majority of the cycle.
At one point I looked up and noticed I was nearly level with the tower which was built on the centre of the hill top, cycling into the wind I kept my head tucked down and felt happy that I'd made some noticeable progress.
20minutes later I looked up and it seemed that I was in exactly the same position..the tower seemed to be in the same spot ... oh my...how deflated I felt as I knew I still had about 9 miles to go.
On I went talking to myself a bit, a few encouraging words, some grumpy words too! Then faced with the combination of a single track road, a steep hill and a man driving a van who had obviously just heard his house was on fire, I felt defeated.
I looked up at the tormenting tower on the hill and to my surprise it was slightly behind me!
Even when we don't think we're making progress we are. Bit by bit if we take steps in the right direction, despite the obstacles that are thrown our way, focus on what you want now keep going and you will get there.
"Perseverance is not a long race; it is many short races one after another." - Walter Elliott
" If we are facing the right direction, all we have to do is keep on walking." - Buddhist saying
Posted by Kathleen Kettles at 14:08 No comments: