From Scotland to the U.S 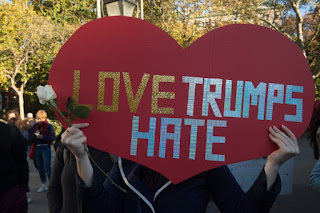 Today has been a weird day - I feel quite sad and frightened.
My kids are fine, life is going well - but it's Donald.
We need to talk about Donald.
Yesterday he banned Muslims and citizens of countries that are predominantly Muslim from entering the U.S
I'm not a politician.
I'm not an academic.
I don't understand politics when they are relatively straight forward - so now with Donald at the helm I feel completely at a loss.
Today I have mostly been sad.
I have just signed a petition to stop Donald from making a State Visit to the UK - I want to show my solidarity to humans just like me, humans who don't want a human like Donald to think we (in the UK and in every single nation of the world) want anything to do with joining his, "club".
I love people.
Some have told me that I have trusted too easily in the past - and I will continue to do so because that's who I am.
That's who we were all born to be.
We are all the same.
I am here for the blink of an eye, as we all are.
Donald is currently in a staring competition with himself and forgetting how fleeting his time on earth, and as President of The United States actually is. I want him to blink - clear his vision and realise his hateful attitude will isolate him, and those who follow him.
My tears are for the people who are feeling scared, sad, angry and isolated by the actions of one man fuelling the insecurities and ignorance of his followers.
Most people care.
Most people love.
Most people want Donald to stop.
I'd love him to find peace in his own heart.
I'd love his followers to find that peace too.
I'm just going to keep my heart open, and hope that in time good will prevail.
And to all the amazing people who went to JFK Airport last night to rally - I was moved to tears and
I want you to know that in this little corner of Scotland I stand with you.
With love,
Kathleen x
"I have decided to stick with love.  Hate is too great a burden to bear." - Martin Luther King, Jr.

Posted by Kathleen Kettles at 16:08 No comments:

Taking down the wall 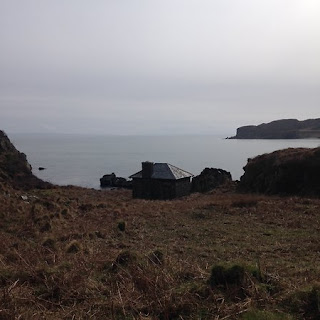 For those of you who prefer to live hidden behind a self built wall...I write this for you.
There's security, certainty a safeness about lying low, hidden from the world and its bombardment of confusing, messiness.
However,  if you're viewing the world with the belief that you mustn't be seen then you are also depriving yourself of the opportunity to witness real beauty and light intertwined with life's confusing messiness.
We cannot live (healthily) by hiding from the world, wearing blinkers and refusing to engage or walk alongside the trials, successes, joy and grief of our fellow man.
Start slowly.
It can be daunting.
Remove one brick at a time.
The view will change and as it does you can remind yourself of the thread of commonality that runs through all of us.
Celebrate that you are never really alone - unless it's self imposed - there is always a way of being with, and reaching out to others.
With love,
Kathleen x

"We are all cells in the same body of humanity." - Peace Pilgrim


Posted by Kathleen Kettles at 15:50 No comments: