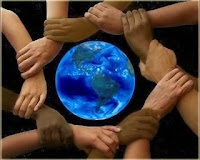 In the past when I heard words being spoken with hatred and spite, venom seeping through every letter it would actually make me feel quite sick - uneasy - as if the simple act of listening left me vulnerable, somehow unable to protect myself from absorbing something toxic, something which didn't belong to me yet inescapable and extremely bad for my health.
I didn't have to know the person being vilified, it could have been a football manager, politician or a whole group of people.  I now understand that the message of hatred being spoken exposes the depth of separation between the inside of the speaker and his relationship with the outside world.
If you know someone who is prone to doing this, then I encourage you to ask them to STOP as soon as they start down that road!  Ask them if, just for a moment they could say something or just think something positive about that person.  If this seems an insurmountable task, explain that simply recognising the human vulnerabilities we share with all mankind as being a good start.  I believe that people who have a tendency to hate and feel angry about most things are only getting a reflection of their beliefs and expectations.  If they expect bad service in the restaurant, that's what they'll get!  If they get annoyed when they're overtaken by a women drivers, then you can guarantee they'll get overtaken by women drivers on a regular basis! If they expect to be late for their meeting, that's exactly what will happen!  Encourage them to give themselves the opportunity to view things differently - even if it's just for an hour initially. Even having no expectation can help lift them from the relentless task of expecting to get annoyed. Help them laugh at their negativity, help them see the ridiculousness of their constant battle with invisible, faceless enemies.  I was brought up hearing, "We're all Jock Thomson's bairns!" which worried me as a child as I'd never met him!  But there's truth there - whenever we think we're separate from others, we will have problems.
"The reason why the world lacks unity, and lies broken and in heaps, is, because man is disunited with himself." - Ralph Waldo Emerson

Posted by Kathleen Kettles at 19:44